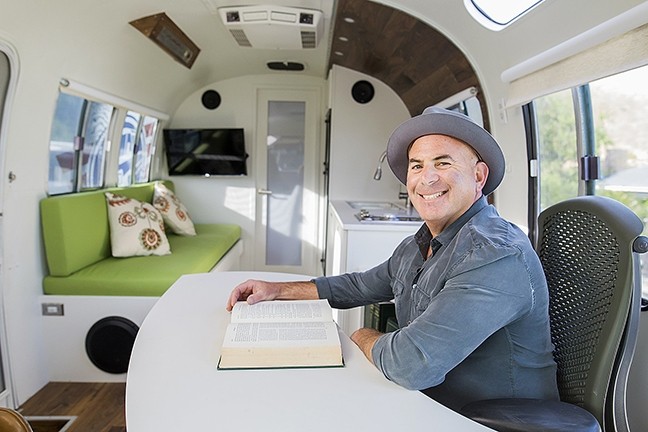 The silver chrome shell glints in the sunlight as the aerodynamic shape of this 1978 Airstream overshadows all the other vehicles in the parking lot. Upon entering, the oval skylights and interior design provide an open, relaxing, and casual feel.

If it weren’t for the stark blue stenciling of a logo on the exterior of the trailer, it would look no different than any other mobile home. However, attorney Stephen Stern spent countless hours renovating the Airstream into what he claims to be the nation’s first Mobile Law Center.

After more than 18 years of practicing law, Stern realized there was a lack of accessible and affordable legal services for those in need. He noticed a lot of people felt intimidated by anything that had to do with the law, and he wanted to address that issue.

“I felt like there was a void of so many people that felt so intimidated by the legal process, lawyers, the language, and the cost, that I wanted to create something that made them feel comfortable,” he said.

And so the idea of the Mobile Law Center was born. Stern wanted a way to help people in need of legal services throughout the Central Coast, regardless of their location or income level. He even makes special trips to clients if they can’t come to him.

“Sometimes people are homebound, they don’t have transportation, they can’t leave,” Stern said. “They can’t come down to San Luis Obispo at your office when there’s an opening.”

After doing extensive research on what kind of vehicle he wanted for his practice, Stern purchased a 1978 Airstream from a real estate agent in Los Osos.

Stern’s mobile office has no address. He practices law from his silver bullet luxury trailer, helping people grow their businesses and deal with debt-related issues. Traveling to different cities on the Central Coast throughout the month to serve his clients, he gets help from paralegal Rebecca Lilley and three Cal Poly interns. The Mobile Law Center helps clients assess their legal situations, charging $45 for 20-minute sessions.

“They’re in control of their situation, they know they can do one of several things to help to resolve it, and they know what’s going to happen if they don’t resolve it,” Stern said.

While the Airstream has been upgraded with modern amenities, such as solar tiles on the roof that serve as a trickle charger for two stout marine batteries and a mobile hotspot, Stern has kept a few of the original features of this vintage vehicle. The Airstream’s original 8-track is still located in the dashboard, along with the polished chrome exterior stripped of chipped paint.

The vehicle has white Corian counter tops, a fully functional bathroom unit in the back, and not a single framed certificate or award on the walls.

“When you walk into a law office, there is a lot of hard wood. Everything is very serious and there’s framed certificates everywhere,” he said. “There’s nothing in this place that’s posted that says I’m special. It’s not about me.”

Stern’s humility shows not only in the decor and presentation of his Mobile Law Center, but also through his practice. He specializes in student loan debt and has handled more than 5,000 cases dealing with debtors.

One of his clients, Tracey Little, has been working at Family Care Network for more than eight years. She decided to go back to school to become a social worker two years ago. In just two weeks, she’ll be graduating and getting ready to start paying off her student loans.

With Stern’s legal services, Little was able to get all the help she needed to map out a plan for her student loans.

“He gathered my information and was super responsive in terms of getting back to me via email with all of my loan options,” she said.

Between teaching part-time at Cal Poly’s Orfalea College of Business and working out of the Mobile Law Center, Stern is now practicing law on his terms.

“I tell my students to follow their dreams, and the money will come after,” he said. “In that sense, I’m living my own words to my students.”

Pismo Beach has a new nursery called Pismo Garden Art. Stop by at 940 Price St. to find fountains, statues, wall plaques and signs, pottery, patio furniture, and more. The store prides itself on having the largest selection of succulents in the county.